BCS Know How is taking you through the six automatic-qualifying BCS conferences in preparation for the 2013 season. Our easy-to-digest previews continue with the Big 12. Scroll down to see our profiles of the other conferences.

West Virginia and TCU will officially make the switch to the Big 12 on Sunday, marking the latest official move in the seemingly endless train of conference realignment.

West Virginia joins the conference after severing ties with the Big East, while TCU is leaving the cozy comfort of the Mountain West to join the ranks of the misnomered AQ conference.

The two squads replace SEC-bound Missouri and Texas A&M to once again give the conference just 10 member schools.

Both West Virginia and TCU endured some controversy on their way to the Big 12. TCU was originally scheduled for a move to the Big East, but dropped that plan once a spot in the Big 12, a more logical geographic group, opened up. The Big East is suing TCU for reneging on that agreement.

West Virginia left the Big East in a storm of lawsuits and broken agreements, which ends with the school paying the conference a $10-million exit fee, with the Big 12 reportedly kicking an extra $10 million.

The conference membership is now as follows:

With Houston’s upset loss to Southern Miss in the C-USA Championship Game, the race for the automatic bid to the BCS given to the highest-ranking non-AQ conference champion has been thrown into relative disarray.

Boise State and Houston were ranked far higher, but because neither will be conference champion, neither can claim the automatic bid. Both can still be chosen as at-large teams.

If TCU enters the top 16 on the final weekend, the Horned Frogs will be BCS bowl bound for the third straight season.

With the bowl season complete, the time again comes for our annual postseason BCS rankings.

Unfortunately, it seems as though Jeff Sagarin has not released a postseason set of rankings, however all five other computers have. As in years past, we will substitute the AP Poll for the Harris Poll as the Harris does not reveal a postseason rankings.

Sagarin’s delay has caused a delay on our end as well, but here’s a set of rankings anyways.

The same formula that the BCS uses will be utilized here, except we use all five computer rankings.

Mostly, this is just for fun, a good look at what the BCS standings would look like if they were released after the end of the season.

Not surprisingly, BCS national champions Auburn comes in on top, well ahead of the rest of the field. TCU finishes second in a fantastic showing for a non-AQ school.

Oregon drops to No. 3 following their BCS National Championship Game loss to the Tigers, and are followed closely by Pac-10 counterpart Stanford at No. 4. 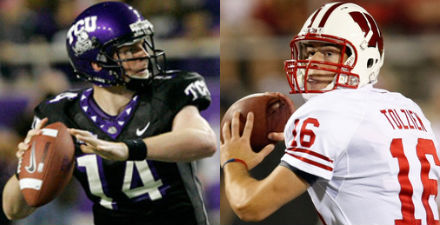 How They Got Here: As the highest ranking champion of a non-automatically qualifying conference — No. 3 in the final BCS standings and champions of the Mountain West Conference — the TCU Hored Frogs were awarded an automatic at-large bid to a BCS Bowl.

Because of a new clause in the selection process for the five BCS bowls, TCU was awarded a bid in the Rose Bowl after the “Granddaddy of them All” lost its traditional Pac-10 conference champion, Oregon, to the BCS National Championship Game.

TCU’s 2010 Season: The Horned Frogs started the 2010 season playing second fiddle to Boise State as the non-BCS conference darling of the year. But after starting the season with victories over Oregon State and Baylor, the Horned Frogs cruised through most of their 2010 schedule and after Boise State faltered late against Nevada, TCU was left atop the ranks of the non-BCS conference schools.

Led by quarterback Andy Dalton, the Frogs spent most of their 2010 season looking forward to a meeting with an undefeated Utah Utes squad in Salt Lake City, but that meeting turned into a blowout victory for the Frogs, all but assuring them of an MWC crown.

TCU’s truest test actually came the very next week, as the Frogs struggled to stay ahead of San Diego State, finally prevailing 40-35 before finishing the season against New Mexico with an easy 66-17 victory.

Wisconsin’s 2010 Season: After stating the season with victories against out-of-conference opponents from around the country, Wisconsin dropped its first Big Ten conference game against Michigan State in East Lansing.

But from that point on, the Badgers could be considered one of the nation’s hottest teams, running off seven straight victories including an upset victory over Ohio State when the Buckeyes were ranked No. 1 in the country.

The Badgers ended the season with huge offensive output against its final three opponents — scoring a total of 201 points in their final three games against Indiana, Michigan and Northwestern.

Matchup to Watch: Both teams have 520 points on the season, but TCU’s defense is among the most vaunted in the country.

How will Wisconsin quarterback Scott Tolzien and his stable of running backs — James White (1,029 yards rushing), John Clay (938) and Montee Ball (864) respond to the threat of a strong TCU defense?

And will Dalton and a tremendous core of receivers be able to take control of the game against the Badger defense?

BCS Know How Prediction: Wisconsin’s 201 points in its last few games were an incredible feat, but also sent some negative media coverage the way of Madison. Will the nearly five-week break have a restorative effect on two rough and tough teams or will either be rusty?

I don’t know about you, but I didn’t learn a whole lot from the ACC or Big 12 Championship Games. Both teams looked both good and bad at times. So I’ll give the winners slight bumps, but for the most part, I can’t say it changes much of my opinion.

The SEC and MAC Championship Games did hold some eye openers though, like maybe Northern Illinois and South Carolina aren’t as consistent as we thought. 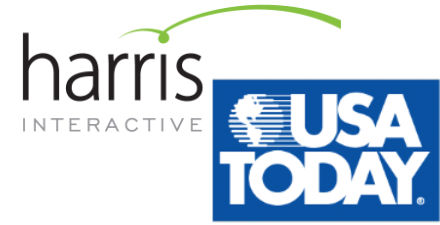 Following their dominating victory over South Carolina in the SEC Championship Game, the Auburn Tigers overtook the Oregon Ducks in the season’s final Harris Interactive Poll.

The Ducks had a blowout victory of their own over instate rival Oregon State, however voters were more impressed with Auburn’s body of work, which helped the Tigers make their way to the BCS No. 1 spot tonight.

The Harris Poll was held until the release of the BCS standings in order to build suspense, but it was easy to determine that Auburn and Oregon would be on their way to the title game.

Not much other movement was evident in the Harris Poll, although some teams saw their support rise and fall.

BCS Know How
Blog at WordPress.com.