With favorites prevailing around the country, it was not difficult to predict a largely stagnant set of rankings come Sunday after week four.

And though not much changed, after a key victory over Auburn garnered a lot of national attention on a less than stellar weekend of matchups, LSU made the biggest move of the Coaches’ Poll week by leaping up a spot to No. 6. The Tigers jump Louisville, who suffer again from a weaker opponent (on which the Cardinals layed more than 70 points).

Elsewhere, Alabama lost two points, and two first-place votes, to Oregon, but remain well ahead of the Ducks. 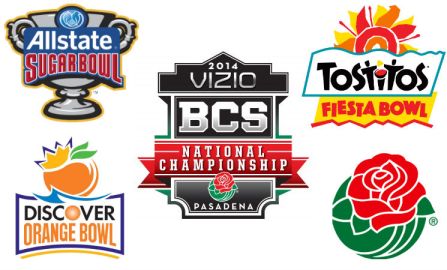 What can we learn from a week with few upsets, likely as a result of the few tests on the docket for the nation’s best teams? Teams such as Stanford and Notre Dame had interesting opponents, but like most of the rest of the country took care of business.

So the projected BCS bowl picture doesn’t change this week, but we can say with some certainty that some of the nation’s best are carving out an identity as we head toward October and the first BCS standings.

Comment: Alabama didn’t dispatch Colorado State in overwhelming fashion and Stanford let Arizona State hang around after jumping out to a big lead, but both continue to look like national title contenders in a crowded field of possible title teams. Alabama gets Ole Miss next weekend and Stanford continues its start to the Pac-12 season against Washington State.

Comment: Seems like without Braxton Miller, Ohio State has been able to turn its offensive attack into a scoring machine, as the Buckeyes posted 76 points against Florida A&M and Kenny Guiton posted six touchdowns. Oregon had the week off, and continues to look national title game worth, but if they are to fall short, the Rose Bowl would likely come calling.

Comment: Is constantly dodging upsets good for a team this early in the season? It might be, or it might just be that Michigan is not as good as was advertised before the 2013 started. But after struggling against Akron and UConn, Michigan remains undefeated, an important distinction this early in the season. If they can get this turned around, a BCS bowl bid could very easily be in their future, no matter how much they’ve struggled so far this year.

Comment: The ACC looks like a strong conference top-to-bottom in 2013, and coming out ahead of teams like Florida State and revived looking Georgia Tech, Maryland and Miami will be a tough road to complete. But Clemson seems the class of the conference, at least thus far, and a Orange Bowl bid will be the reward if they are able to top the conference.

Comment: Louisville put up a big 72 points against an inferior FIU team on Saturday, staking yet another claim to their spot as the best of the newly formed AAC’s football schools and doing nothing to change the general consensus that they’ll be able to finish this season undefeated. But even an undefeated season might not be enough to get them to the title game.