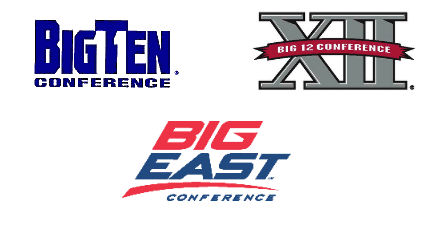 Game of Last Week: Ohio State 20 vs. Iowa 17. The Buckeyes struggled, but they did just enough to stay alive in the three-team Big Ten title race, that will likely come down to positioning in the BCS standings.

Game of Next Week: Ohio State vs. Michigan. Ohio State will need some help to claim the Big Ten title, but a victory in their traditional rivalry game with the Wolverines is as important as ever.

Game of Last Week: Texas A&M 9 vs. Nebraska 6. A victory here would have given the Cornhuskers the North title, instead the Aggie victory opened both division races and left it to the final weekend to decide who will fight for the Big 12’s BCS bid.

Game of Next Week: Oklahoma vs. Oklahoma State. Bedlam will have an extra important feel this year, as a victory for the Cowboys would give them the Big 12 South title, while an Oklahoma victory would likely give the Sooners that crown — by virtue of a three-way tiebreaker.

Game of Last Week: Pittsburgh 17 vs. South Florida 10. If the Bulls could have won on Saturday, they would have had a surprisingly good shot at the Big East title, but a Panther victory ended most of those hopes while keeping Pitt a game clear of the rest of the Big East race.

Game of Next Week: West Virginia vs. Pittsburgh. The Backyard Brawl has added meaning as a victory for Pittsburgh would help them get to the BCS, while a West Virginia victory could spell a variety of possible Big East conference champions.

Game of Last Week: Northwestern 21 vs. Iowa 17. A last minute drive — which would prove to be his last of the season — engineered by Wildcat quarterback Dan Persa gave Northwestern the upset victory, their fifth win over Iowa in six tries.

Game of Next Week: Ohio State vs. Iowa. The game has slightly less importance after Iowa’s loss to Northwestern, but the test will be just as still for the Buckeyes in Iowa City.

Game of Last Week: Texas A&M 42 vs. Baylor 30. A meeting between two surprise contenders in the Big 12 conference proved to be an affirmation of the Aggies victory over Oklahoma the week before.

Game of Next Week: Nebraska vs. Texas A&M. A victory here would assure Nebraska of the Big 12 North title and a berth in the Big 12 Championship Game, while a victory for the Aggies would keep them in the race for the South.

Game of Last Week: Connecticut 30 vs. Pittsburgh 28. UConn running back Johnathan Todman ran for 222 yards and the Huskies converted a fourth down in their own territory to give the Panthers their first Big East loss and reopen the Big East title race.

Game of Next Week: Connecticut vs. Syracuse. Although no game seems to be a “knockout game” in the Big East race this year, victories by either team would certainly help their aspirations for a Big East conference title.

Game of Last Week: Michigan 67 vs. Illinois 65. In a game that made the schools’ basketball game score from last season look paltry, Michigan outlasted the Illini in three overtimes.

Game of Next Week: Ohio State vs. Penn State. The Buckeyes will have to pass the test of a suddenly rejuvenated Nittany Lions team if they want to stay alive in the crowded Big Ten race.

Game of Last Week: Texas A&M 33 vs. Oklahoma 19. The Sooners suffer a crushing second loss in Big 12 play while the Aggies impress enough to get a spot in this week’s BCS standings.

Game of Next Week: Oklahoma State vs. Texas. On the road in Austin, the South Division-leading Cowboys will again be put to the test against a team that is usually in their spot.

Game of Last Week: South Florida 28 vs. Rutgers 27. The matchup did not disappoint, as the Bulls captured their first victory over the Scarlet Knights in five tries.

Game of Next Week: Pittsburgh vs. Connecticut. The Huskies have a chance to derail the seemingly easy road ahead of the Panthers for the Big East crown with this Thursday night showdown.

Bowl Eligible Teams: None yet.

Game of Last Week: Iowa 37 vs. Michigan State 6. The Spartans were looking to use a road win at Iowa to propel them to an undefeated season and a Big Ten crown. The Hawkeyes had other ideas — knocking Michigan State out of the BCS title race, and reinserting themselves into the Big Ten race.

Game of Next Week: Illinois vs. Michigan. The Illini’s only two conference losses have come against the cream of the Big Ten crop, can Michigan and Denard Robinson hang with them at home?

Game of Last Week: Nebraska 31 vs. Missouri 17. Missouri looked to keep its undefeated season alive against Nebraska after toppling former BCS No. 1 Oklahoma last weekend. The Cornhuskers instead ran all over the Tigers and gave Missouri its first loss.

Game of Next Week: Oklahoma State vs. Baylor. Two surprise contenders for the South Division lead will play the equivalent of a knockout game for a chance at the South crown.

Game of Last Week: Connecticut 16 vs. West Virginia 13. The Huskies needed overtime, but they were finally able to defeat West Virginia — a first in the team’s time in the Big East.

Game of Next Week: Rutgers vs. South Florida. Its hard to stress enough — every team in the Big East can still take the conference title and BCS bid, but if either of these teams want a shot, they’ll have to come out of this matchup with a win.

Bowl Eligible Teams: None yet. 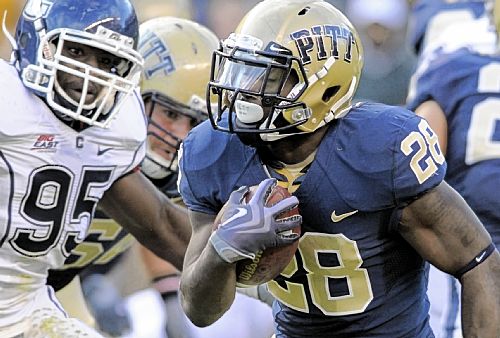 As part of BCS Know How’s 2010 season preview, we will be breaking down our ten favorite Heisman hopefuls to get you ready for this season’s edition of the Heisman Watch.

Here’s our No. 3 selection, Pittsburgh sophomore running back Dion Lewis.

Just mentioning the name Tony Dorsett to even the most casual Pittsburgh Panther fan evokes all kinds of fond memories from his four year career as a Panther, during which time he was awarded the only Heisman in program history.

So when freshman running back Dion Lewis burst onto the scene in 2009 and broke Dorsett’s freshman season rushing record by more than 100 yards, it was no surprise the nation took notice.

Now back as the nation’s leading returning rusher in terms of yards, Lewis looks poised to help the Panthers back to the top of the Big East, and possibly collect college football’s most prestigious award along the way.

Lewis had entered his first season with doubts about his ability to carry the full load of carries as a first-year starter, but Lewis did more than shoulder the load, carrying the ball 25 times per game and scoring 17 touchdowns to go with the nation’s third-most rushing yards.

2010 will be different for the New York-native runner, as he will be taking his handoffs from a first-year quarterback in Tino Sunseri and will have to help Sunseri adapt to the offense by taking some of the pressure off of the sophomore.

It might not be such an easy proposition, however, as Lewis will be running behind a line that only returns two of its five starters from Lewis’s record-breaking season. Senior Alex Karabin, who played special teams exclusively will take over at center, while both guards will need to be replaced.

Bottom Line: Lewis is going to be the key to any success the Panthers hope to have in 2010, and it won’t be easy. He was an unexpected phenom in his freshman year — in 2010 opponents are more than ready to pressure his every move.

His performance may end up coming down to whether Sunseri can establish the Pitt passing game as a legitimate threat. If he can’t it will be very easy to crowd the line against Lewis and take advantage of an inexperienced line to stop Lewis from excelling.

If, however, Sunseri can establish the threat of a passing game, and the offensive line melds like it seems coach Dave Wannstedt believes it can, Lewis will be the nation’s most dangerous runner and a legitimate threat to win the award as a sophomore.

Plus, a successful Lewis means a successful Panther squad, which only helps the Heisman potential Lewis hopes to have, which despite his age, is extraordinarily good in 2010.

The offensive prowess of the Bearcats finally showed itself in the second half, as Cincinnati was able to make a late comeback and beat the Pittsburgh Panthers, 45-44 and secure a second straight Big East title.

The victory also secured the Big East’s automatic BCS bid for Tony Pike and the Bearcats. A Orange Bowl or Fiesta Bowl bid is likely in their future.

Pike led the Bearcats up and down the field on multiple drives in the second half, trying to match the output of Dion Lewis and the Panther offense, who scored 31 of their 44 points in the first period. Lewis would finish the game with 195 yards and three touchdowns, but it was not enough to outlast the undefeated Bearcats.

Conference Leader: Ohio State (9-2, 6-1) has clinched at least a share of the Big 10 title and has the tiebreaker, clinching the conference’s BCS bowl bid.

Game of Next Week: Ohio State vs. Michigan. Bowl eligibility rides on this one for the Wolverines, although no reason is necessary for this game to be the game of the week in the conference.

Game of Last Week: Oklahoma State 24 vs. Texas Tech 17. Needing to win in order to keep hope alive of a Big 12 title, the Cowboys delivered, doing just enough to beat the Red Raiders.

Game of Next Week: Kansas State vs. Nebraska. For the lead in the Big 12 North.

Game of Last Week: Cincinnati 24 vs. West Virginia 21. Tony Pike was the designated TD thrower, and the Bearcats kept hopes for a perfect season alive, barely escaping with the victory over the Mountaineers.

Game of Next Week: Louisville vs. South Florida. The Big East schedule is rather sparse next week, but Louisville can still become bowl eligible with victories in the next two weeks. They’ll need to beat South Florida to keep that hope alive.

BCS Know How
Blog at WordPress.com.