Q. When will the first BCS standings be released? What’s the rest of the release schedule?

A. The first BCS standings will be released on the Sunday following Week Seven action, Oct. 16.

The BCS will then release rankings for the rest of the season as follows:

A. The following five teams changed conference affiliation before the start of the 2011-12 college football season:

Q. What is the order in which the BCS bowls select participants?

A. For the 2011-12 college football season, the BCS bowls will fill their vacant spots once the national championship game has been filled and the Rose, Fiesta and Orange Bowl fill their respective host contracts. The bowls will select in this order:

You can find more information about the BCS bowl selection process at the BCS Bowls page.

Q. What are the “automatically qualifying” BCS conferences?

Q. What are the “non-automatically qualifying” BCS conferences?

Q. When are the conference championship games?

A. Conference championship games for the Pac-12, ACC, SEC, Big Ten, MAC and C-USA will be held on Saturday, Dec. 3, the last weekend of the season.

Q. Who is eligible for postseason play?

A. Members of the Football Bowl Subdivision (FBS) will be eligible for postseason play if they finish the season with a winning percentage above .500. If there are not enough bowl-eligible teams, or a conference cannot completely fill its bowl contracts, then teams which finish at .500 will be eligible as well.

For the 2011 season, the University of Southern California will not be eligible for postseason play due to sanctions handed down to the university by the NCAA because of NCAA infractions.

Q. What schools are currently under investigation by the NCAA?

A. BCS Know How is keeping track of the ever-growing list of ongoing investigations that the NCAA is performing right HERE.

Have any other questions? Post them below, and we’ll be sure to update! 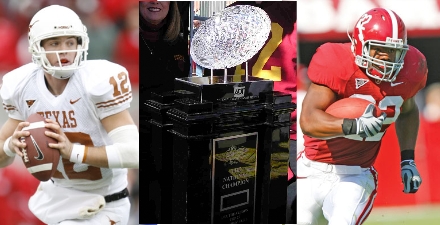 Oh what could have been.

We waiting weeks for this weekend to come, hoping that it would deliver the drama and intrigue that the rest of the season was missing, and it did not dissapoint.

Texas, playing in what was supposed to be a cakewalk of a Big 12 Championship Game instead needed instant replay on the clock and a 46-yard field goal that just sneaked in the uprights to clinch victory and a likely shot at the national title game.

Alabama and Florida were supposed to play in the season’s most intriguing game. Instead what we got was an Alabama romp, blowing out the Gators and likely clinching their shot at the national title.

So it’s likely that we’ll get that SEC Champ vs. Texas game when the last BCS standings are released tomorrow.

But it could have been much different.

If Texas had lost, we would have entered one of the messiest final BCS rankings in the system’s history, but we avoided that by the slimmest of margins.

So here’s our reality for tomorrow, and what we know so far:

So the six BCS conference bid are set, and two at-large bids are also nearly set in stone.

It seems like the Big Ten teams that trail behind Ohio State; Iowa and Penn State, will be one of the at-large selections. The other selection cannot be a Big Ten team, but could be any of the other teams mentioned.

If logic holds up, Boise State would receive that bid, and we at BCS Know How project that they will in fact get that final bid. 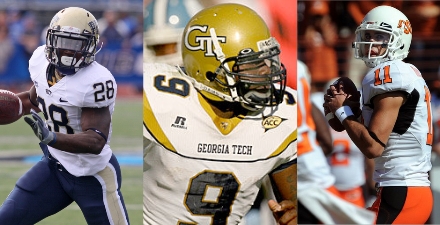 We went into this weekend hoping for some upsets, and while we got a couple of interesting ones, it didn’t change a whole lot at the top of the BCS standings.

The upsets came in the final weekend of November, and the final full weekend of college football action as this unusually upset-free season comes to a close.

Georgia Tech – already having secured a spot in the ACC Championship Game – and knowing a BCS bowl bid is the best they could do, overlooked a very game Georgia team and fell to the Bulldogs in the rivalry game.

In Bedlam, Oklahoma State, who had a lot more riding on the game than Oklahoma did – looking for a BCS bowl at-large bid – slipped terribly, not able to score a single point and falling to the Sooners 27-0.

No. 9 Pittsburgh, who had been looking towards a Big East showdown with the Cincinnati Bearcats, obviously overlooked the Backyard Brawl, and fell to West Virginia on a last second field goal.

Texas and Alabama had some trouble finding victory over the long weekend, but neither actually lost. No harm, no foul, and the SEC Championship as a national semifinal holds true for a second consecutive year, as Florida and Alabama will face off to see who gets to represent the conference in the national title game. The loser of the game, although not happy, will likely still see a Sugar Bowl bid in their future.

Surprisingly, five of the six BCS conferences will hold “conference championship” games, although only three (Big 12, ACC and SEC) actually have official games with such a name.

The Pac-10 and Big East will feature matchups that will decide the conference’s regular season title winners and BCS bowls bids after this weekend’s action was not enough to decide either crown.

The Pac-10 will feature a Thursday Civil War between Oregon and Oregon State, the winner likely headed to the Rose Bowl. The Big East will see an undefeated Cincinnati and the aforementioned Pitt face off for the Big East crown.

But that is all the future, for right now all we can do is project this week’s BCS standings, which will be released after the slate of FOX NFL games tomorrow on the OT show: 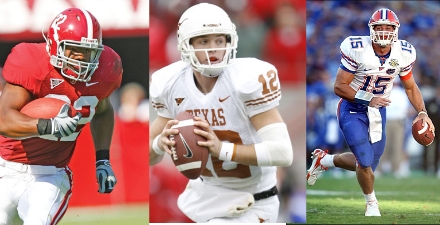 Sure, Thanksgiving isn’t until next week, but given the opportunity, the nation’s best teams feasted on much weaker opponents on Saturday – meaning yet another week will pass without any change at the top of the BCS.

The top four of the BCS took on four teams on Saturday with a combined 19 wins.

The team with the most wins of the four was an FCS team.

And Florida, Alabama, Texas and TCU reacted appropriately, pasting their opponents in all four games and keeping all of their hopes alive for a national title chance.

Little BCS noise was made at all this weekend, with the top team to lose being the LSU Tigers, who were already counted out of the BCS this year, seeing as though they would be a third SEC team at the party that could only allow two SEC teams in.

In fact, the most important news when it comes to the BCS this weekend came from Clemson and Kansas State – two teams not even ranked in the top 20 – who were both able to secure spots in their respective conference championship games.

Texas also clinched their spot in the Big 12 Championship Game against Kansas State with their win over Kansas, but that spot was long assumed to be going to the Longhorns anyways.

The Pac-10 title picture is now clear, as Oregon State and Oregon are the only teams with chances left to make it to the Rose Bowl after Oregon defeated Arizona and Cal beat Stanford to knock both teams out of contention.

With very little change at the top, the BCS again is going to look pretty familiar tomorrow, but there will be change at the No. 8 position, as the shaky LSU team finally lost.

Without any polling information, here is a quick stab at what the BCS top 8 might look like when released after the first slate of NFL games are complete tomorrow: