We take one more trip to the BCS this season, with five BCS bowls, 10 teams — fittingly all of which are from the “original” power six conferences that formed the basis for this change in championship crowning all those years ago. These pairings are according to multiple reports from early Sunday.

For more information on how the teams were selected, head over to the BCS Bowls page. 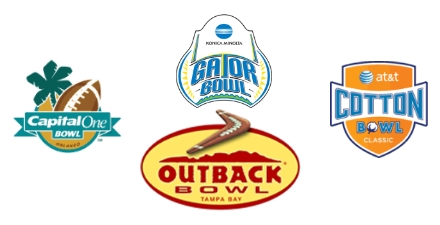 The BCS (that schedule HERE) may have the glory, but the heart of the bowl season comes from the 30 non-BCS bowls that comprise a loaded schedule of 60 teams playing in the span of 23 days.

Bowls from Hawaii to Yankee Stadium will span the country throughout bowl season and provide entertainment all through the holiday season.

This year’s slate is highlighted by strong matchups which include:

The non-BCS bowl matchups have been finalized and are as follows: