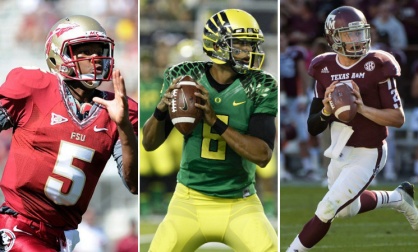 Johnny Manziel loves playing against Arkansas, following up his 500-plus yard performance last season against the Razorbacks with another 300-plus yards of offensive in Texas A&M’s Saturday night win. Manziel finished with 261 yards passing and two touchdowns through the air to go with 59 yards rushing. The Aggies get Ole Miss and Auburn after their bye next weekend, chances for Manziel to either bolster his chances at a repeat trophy, or watch others pass him by.

Tajh Boyd was back in a big way on Saturday, accounting for four touchdowns in Clemson’s dominating victory over Wake Forest. Boyd recorded his 100th career touchdown and passed for more than 300 yards on the day, picking apart the Demon Deacons easily. With Boston College and Syracuse up next for Clemson before they take on Jamies Winston and Florida State, Boyd has a few weeks to do some stat-padding.

Teddy Bridgewater and Louisville were off this weekend, but with more than 1,200 passing yards and 14 touchdowns through four games, and some weaker AAC defenses upcoming, expect Bridgewater to stay in the Heisman race all year.

Clearly the star of Saturday’s game between Alabama and Ole Miss was the Crimson Tide’s defense, but once again AJ McCarron efficiently led the Tide to the score drives they needed to pull off the victory, although the stats were not eye-popping. McCarron threw for 180 yards and was intercepted once in the 25-0 win.

Marcus Mariota didn’t need to do much to help Oregon to a victory over California in the Ducks’ return from a bye week. The Golden Bears were put away early, and Mariota was a big part of the early burst, throwing two touchdown passes and rushing for a third in the blowout victory. Mariota might not be truly tested or forced to play a full game until Oct. 12 against Washington.

Jameis Winston passed for 330 yards and four touchdowns against Boston College on Saturday, and for most of the game, Florida State needed every single one of those touchdowns to avoid the upset. Though the Eagles trailed off at the end, they hung around for the majority of the game, and Winston stepped up when needed. The freshman quarterback also helped out the Seminoles’ rushing attack with 67 yards on the ground.