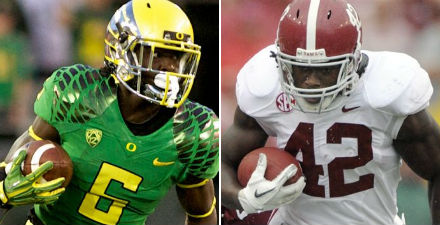 For the football played, the losses suffered and wins gained, how much have we actually learned about the contenders from opening weekend to today?

An SEC team will debut at the top of the BCS. Alabama has made that much certain with the way they’ve run the table thus far this year. Relatively shoddy (fourth or fifth as opposed to first) computer support leading up to the first BCS rankings should be of no concern to Alabama’s hopes or the Tide faithful. Play like this against the SEC, and the spot so familiar to the Tide at this point will remain their’s.

Chasing the Tide is a group so wide that the season will have plenty of intrigue down the stretch. First among the contenders is, unsurprisingly, No. 2 Oregon, which enjoys a wide-spread support among pollsters and growing support in the computers as the season progresses. Again, the recipe for the Ducks (you may need to read that twice) is to win out to make the championship game.

The real intrigue will likely start at No. 3. The two combatants? Familiar names, but unfamiliar in recent seasons to the BCS conversation — Notre Dame and Florida. Both enjoy heavy support in the computers. And with West Virginia and South Carolina out of the way in the human elements, the two will battle tightly for the No. 3 spot tomorrow. Either could take it. For now, let’s go with the SEC’s wider-spread support in the computers and among voters to give the Gators the edge they’ll need to grab the No. 3 spot.

The Big 12 deposits a few teams in the top 12 tomorrow, starting with the conference’s lone remaining undefeated, Kansas State. The Wildcats could easily claim the fifth spot, chased by the top-tier group of one-lossers. That group includes South Carolina, LSU and Oklahoma, all of which will be rewarded heavily for staying mostly on course — and having some key wins across the board in recent weeks (South Carolina over Georgia, LSU over South Carolina, Oklahoma over Texas). Any of those three could land in the spots six through nine. But for now, the SEC teams will still get the benefit of the doubt.

So we come to the symbolic midway point of the college football season — the first BCS rankings. Are there many surprises? No. But the intrigue remains. You’ll want to stay tuned.

Remember, we’ll be here to take you through all of it, starting with tomorrow’s releases of the human polls, computer rankings and BCS. Follow along all day tomorrow @BCSKnowHow and right here to stay up to the second with projections, mathematical breakdowns of the computers, human polls and everything in between. Then follow along this week as we break down scenarios and implications.

Here’s what the BCS standings will likely look like when they are released tomorrow at 8:30 p.m. ET on ESPN:

One thought on “Projected BCS Standings: Alabama, Oregon to lead the way in first BCS rankings of 2012”